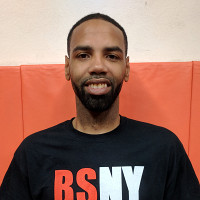 Coach Mark McCarroll grew up in Jamaica, Queens, and starred in high school at perennial New York City power Christ the King. The 6-foot-10 forward received scholarship offers from Villanova, Notre Dame and Florida St., among several others, but chose to attend the University of Pittsburgh. At Pitt, Mark played for Coaches Ben Howland and Jamie Dixon and helped lead the Panthers to the 2003 Big East Tournament title. He joined Basketball Stars in 2014 and has also served as the JV coach at Dwight High School on the Upper West Side since 2015.