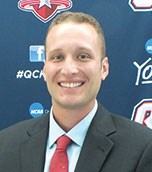 Jason Posser comes to BSNY after over 17 years of college coaching experience.  He will be bringing to BSNY a vast amount of college basketball experience.  Not only from the coaching side of things, but academics as well, and will assist our BSNY athletes in the college process and how to go about playing college athletics and/or choosing the school that can be the best fit.

He has been at Division 1 programs such as Providence College, which is in the Big East Conference, as well as stops at Hofstra University in the CAA Conference, and Queens College (NY), a Division 2 school in the ECC Conference.  Coach Posser has been an assistant coach for the Queens College men’s basketball team from the 2016-17 season to the 2019-2020 season. In addition to coaching duties, he also works in the QC Fitness Center as Fitness and Recreation manager.

During his time as an assistant coach at Queens College, the team went to the postseason 2 out of the 4 seasons he was there.  In his first year as assistant coach, under head coach Matt Collier, finished above .500 with a playoff berth for the first time in years for Queens College (NY).  In those four years, he also helped develop 4 All-Conference players.  Coach Posser not only assisted coach Matt Collier in all aspects of the team, but his main focuses were on the team’s defense, game plans, and scouting reports.  He also worked very closely with the players in their on and off court development.  Through drills and court work, as well as use of film and video to further study their games and the teams strengths and weaknesses. 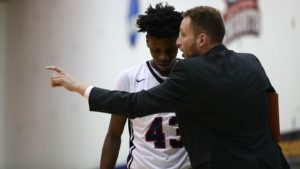 Coach Posser previously spent seven seasons as a member of the Hofstra University Men’s Basketball Program, and the last five as the team’s video coordinator.  During his time there, the Hofstra Men’s Basketball team went to 3 Postseason tournaments.  Along with team success, he was also part of the development of 2 Players of the Year in the CAA Conference (Charles Jenkins, Juan’ya Green).

In his duties as video coordinator, Coach Posser assisted the coaching staff with scouting reports on opponents using DV Sport software. In addition, he handled all film exchange, game editing and post-game reports for the staff. Coach Posser also made a variety of highlight videos for players and hype videos throughout the season.

In his role with the program, Coach Posser also assisted with the academic monitoring of student-athletes.  Providing them with the guidance to get through the rigorous demands of being a college student-athlete.  In addition, Coach Posser was heavily involved in Hofstra’s community service initiatives, organizing and participating in many of them.  Bridging the gap between the college and its surrounding communities.

From 2004 to 2009, Coach Posser was a manager with the Providence College Men’s Basketball Team. He assisted the coaching staff in all aspects of the program and served as the Head Manager in 2008 and 2009.

During his career with Providence College and Hofstra University, Coach Posser has been a part of five teams that advanced to postseason play. As well as the development of 4 NBA Players in MarShon Brooks, Ryan Gomes, Charles Jenkins, and Justin Wright Foreman.

Coach Posser has also served as a camp counselor at a variety of basketball camps, including the Joe Mihalich Elite Boys Basketball Camp, 5 Star Basketball Camps, Speedy Claxton Skills Academy and Providence College Basketball Camps.  As well as working at the prestigious Camp Winadu for 5 years, from basketball counselor to Group Leader of the 11 year old division.

Posser graduated from Providence in 2008 with a degree in business management. He earned his Master’s Degree in Educational Leadership & Policy Studies: Higher Education from Hofstra in 2013.