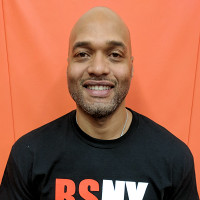 Coach Gilson DeJesus grew up in Sao Paolo, Brazil, before coming to the U.S. for college. He starred at Kansas State, where he led the Wildcats in scoring while emerging as one of the country’s best 3-point shooters en route to multiple trips to the NCAA Tournament. He was invited to Portland Trail Blazers camp in 2003. Gilson went on to play professionally for several years overseas, with stops in China, Mexico and Brazil.