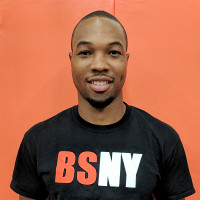 Coach Devon Young was raised in Monmouth, New Jersey, and starred at South Brunswick High School before going on to play at Division II Felician University. He was named Central Atlantic Collegiate Conference rookie of the year and was named second-team All-District by ESPN the Magazine in 2009-10. He graduated from Felician with a degree in Accounting. Devon joined Basketball Stars in 2016.