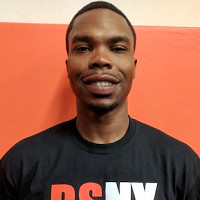 Coach Rich Williams grew up in Brooklyn and attended Transit Tech, where he was a three-sport star for the Express. Rich was widely regarded as one of the top guards in New York City, earning a spot in the Jordan Brand Regional Game, before going off to prep at Vermont Academy. He committed to Manhattan College and played a key role on the Jaspers’ 2014 MAAC tournament championship team. As a senior, he was named second-team all-conference, averaging nearly 15 points, 5 rebounds and 3 assists, while earning a degree in Psychology. He joined Basketball Stars in 2018.