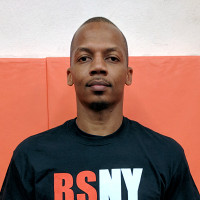 Coach Andre Howard grew up in Philadelphia and starred at Overbrook High School on the city’s west side. He began his college career at Pitt then transferred after two years to St. Joseph’s to play for legendary coach Phil Martelli. He led the Hawks in scoring and rebounding as a junior. After college, Andre enjoyed a stellar professional career overseas with stops in Italy, Spain, France and Argentina. He also won the the 2004 Nike Battlegrounds tournament. He joined BSNY in 2017.